If you would like to know more about how to become a deputy then contact our free legal helpline by phone or email.

What is a deputy?

If a person loses mental capacity and does not have a Power of Attorney in place, it may be necessary to apply to the Court of Protection for a Deputyship Order. There are two types of deputyship:

This gives the deputy authority to manage someone’s financial affairs on their behalf. This could include paying their bills, organising their pensions and even taking advice in respect of investments.

Here, the deputy has the authority to make decisions about someone’s care, residence and medical treatment. However, a court will only appoint a personal welfare deputy in limited scenarios.

Who can apply to become a deputy?

You can apply to be appointed as a deputy if you are 18 years or over. A deputy is usually a close relative or friend of the person who needs help in making decisions.

The Court can also appoint two or more deputies for the same person.

It is also possible for a professional to act as a deputy. For example, an accountant, a solicitor or a Local Authority could act as a deputy. The Court of Protection can also appoint a specialist deputy, called a panel deputy, from a list of approved law firms and charities if there is no one else available to act.

What are my responsibilities as a deputy?

If you are appointed as a deputy, then you will have numerous responsibilities. These include following the principles enshrined within the Mental Capacity Act 2005 and ensuring that you act in the best interests of the protected party. If you are managing someone’s property and financial affairs, you must keep records of the finances you manage on their behalf.

Will I be supervised?

Yes. A Deputy must provide an annual report to the Office of the Public Guardian. This will detail decisions made within the year and any financial transactions. In contrast, Attorneys appointed under a Lasting Power of Attorney will not have any reporting duties.

further help with How to become a deputy?

If you need assistance in applying to be a deputy yourself or you are interested in a professional deputy being appointed, then please contact our Court of Protection team on 0808 139 1606 or send an email to us at [email protected]

A mother’s gift to her sons is being reviewed by the court. Solicitor Chris Green is assisting the two attorneys in a Court of Protection gift dispute. Here are the details.

Our clients were appointed as attorneys under a Lasting Power of Attorney made by their mother.

Because the mother did not want to go into care a decision was made for her house to be sold and for her to move in with one of her sons in a new property in Devon. The proceeds from the sale of the mother’s house were then divided equally between her three children.

Sometime after moving to Devon, the mother suffered a serious stroke. Her condition was so bad that she could no longer be looked after at home and she was moved to a care home. The attorneys applied for NHS Continuing Care funding, but it was refused. They have therefore been paying all their mother’s care costs themselves.

However, the application for funding seemingly prompted the local authority to investigate what had happened to the proceeds of the sale of the mother’s house. An application has been made to the Court of Protection by the Office of the Public Guardian. It alleges that:

(i) the mother lacked the necessary capacity to give the proceeds of sale to her children; and

(ii) the current funding arrangement, i.e. the family paying the care costs, is not secure nor sustainable.

If you are involved in a Court of Protection gift dispute (particularly one where a court application has been made against you as an attorney, a Lasting Power of Attorney has been suspended, or the Office of the Public Guardian is investigating matters under an attorneyship) then please contact our free legal helpline for guidance.

If you would like us to deal with your court application and require further guidance on Court of Protection fees then call our free legal helpline or send us an email.

The Court of Protection usually charges a court fee of £365 for each application it deals with.

However, the full fee is not always payable. The court fee can reduced by 50% or even removed entirely.

Court of Protection fees will be fully exempt if the person to whom the application relates is in receipt of certain welfare benefits. It is important to remember that it is the person who has lost capacity that must be receiving the qualifying benefits, not their attorney.

The qualifying state benefits are:

Remission of Court of Protection fees

A person may be entitled to a 50% remission of Court of Protection fees depending on their age and disposable capital or income.

Disposable capital is usually made up of the following, though this is not an exhaustive list:

If an applicant under 61 has less than £3,000 in savings, they will likely be able to get help with the court fees, as long as they receive qualifying welfare benefits and are on a low income.

If the applicant is aged 61 or over and holds £16,000 or less in savings, they may be able to get help with the court fee.

A person may be entitled to a remission of the fees if their monthly income is below a certain level. Income is money receive from any source and can include wages, rental income, and the sale of goods; publicly or privately, including over the internet.

If you would like to appoint us to make a Court of Protection application and require further guidance on fees then please do not hesitate to call our legal helpline or send us an email.

Court of protection lawyer, Chris Green, looks at what is involved in appointing a professional deputy.

If a person loses mental capacity and does not have a power of attorney in place, it may be necessary to apply to the court of protection for a deputyship order.

A deputy is someone who manages the financial affairs of a person who has lost capacity.

A person may lose mental capacity through an age related condition, such as dementia or Alzheimer’s, or as result of another debilitating illness or through an accident

(i) has received or is expecting to receive a large sum of money – maybe as a result of a personal injury claim or a medical negligence claim. Where large sums of money are involved the court of protection may prefer to appoint a professional rather than a family member or friend to manage the funds;

(ii) doesn’t have any close family or friends who are able to be appointed as a deputy;

(iii) lives some distance away potential attorneys or there is likely to be a dispute over who should act as attorney; and

(iv) is likely to have complex issues in relation to managing and dealing with their affairs, such as:

Professional deputies are monitored and subject to extremely close supervision by the Office of the Public Guardian and the court of protection. Furthermore, the costs that a professional deputy can charge are regulated by the court.

A professional deputy will have an extensive and comprehensive understanding of how deputyships are dealt with, the procedures of the court of protection, the standards issued by the Office of the Public Guardian, and the Mental Capacity Act 2005.

We specialise in court of protection and deputyship law. If you need free initial guidance on appointing a professional deputy then please contact our free legal helpline on 0808 139 1606 or send us an email. 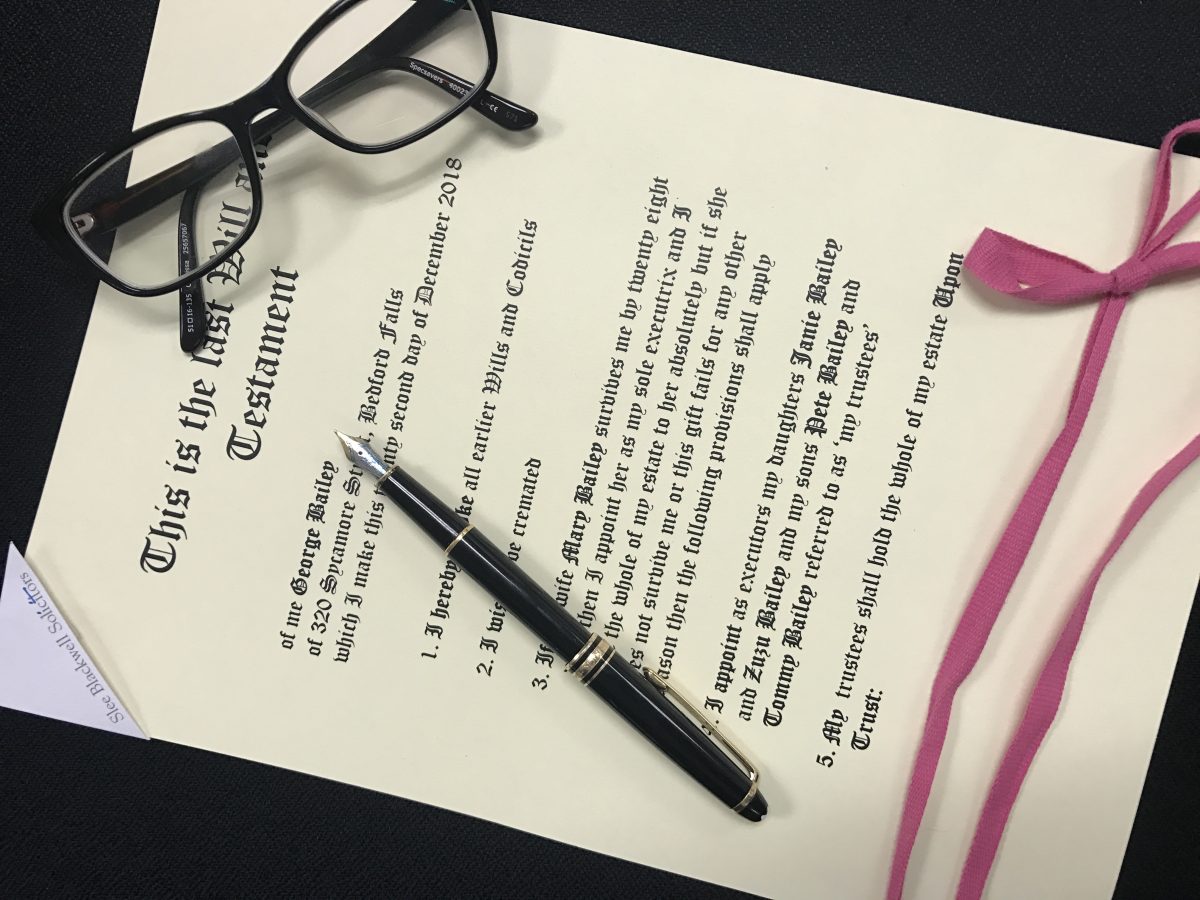 Wills & weddings can be a difficult marriage. For further information on how marriage affects the validity of a will contact our free legal helpline on 0808 139 1606 or by dropping us an email.

A recent case in the Court of Protection has highlighted how marriage affects the validity of a will.

A father of three daughters in his mid-eighties had given one of them a lasting power of attorney before he developed Alzheimer’s. He had also drawn up a will leaving his long-term partner the following:

(ii) the majority of his Pension; and

(iii) the right to live in his home for two years.

The Residue of his £1.7 million estate was to be divided equally between his three daughters.

The father subsequently indicated a wish to marry his partner. The daughter who was his attorney applied to the Court of Protection to prevent the marriage.

One of the court’s considerations was how marriage affects the validity of a will. When someone marries, any will made before the marriage is automatically revoked, unless it is made in contemplation of the marriage. Accordingly, unless the person then makes a new will after the marriage then they will have no valid will.

Where there is no valid will the rules of intestacy apply. Under those rules, his new wife would have received £250,000, together with half of the rest of the estate. The other half would be divided equally between the three Daughters.

The decision to marry is not considered particularly complex. All you have to understand is that you are getting married to the person you wish to marry and that you are not already married. You do not need to understand the complexities of how the marriage may affect your will or financial circumstances.

So the Court of Protection allowed the marriage to proceed even though the father was then unable to make a new will.

The Court of Protection encouraged the family to put the dispute behind them and focus on care, as the father was likely to need a lot of help in the future.

If you require guidance on how marriage affects the validity of a will or you are involved in or dealing with an estate where a dispute has arisen then please contact us for a FREE case assessment on 0808 139 1606 or send us an email.